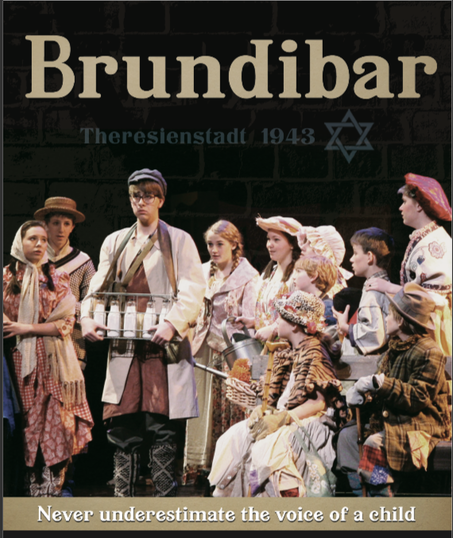 The Brundibar & Vedem Project will launch in January 2022. As part of our mainstage series, we are producing a children's opera called Brundibar, in which members of the Indianapolis Children's Choir will perform alongside our Resident Artists. It was written in Prague right around the beginning of World War II, and was taken to the Terezin/Theresienstadt Concentration Camp, which was a propaganda camp where visiting dignitaries would be shown how “wonderfully” the Nazis were treating the Jews. It was performed 55 times by children in the camp during the war.

About the Production
BRUNDIBAR
Opera by: Hans Krása

When the Nazis came to power in the 1930s, Jews from Germany and surrounding countries sensed the impending danger and began sending their children to Prague in an effort to protect them. Prague, relatively distant, was a city full of culture and education. As hundreds of children arrived each month, the Prague orphanages quickly exceeded capacity. In 1938, Czech composer Hans Krása and librettist Adolf Hoffmeister wrote the opera Brunidbar for a
government competition that was later cancelled due to political developments. In 1941 rehearsals of the opera began at the Jewish orphanage in Prague as a vehicle for children to perform and entertain the thousands of other children in the city’s orphanage system.

The opera was brought to Theresienstadt, (Terezín), a town approximately 60 km from Prague. There it was
performed 55 times by the children in the concentration camp under the direction of Jewish music teachers,
including the composer. Theresienstadt was neither a ghetto-neighborhood within the city, nor a concentration extermination camp. It was a “model” camp constructed by the Nazi command to deceive the outside world into thinking the Jews were being treated humanely. In reality, Theresienstadt was a gateway to the death camps. Performances of Brundibar were part of this deception. In 1944, the Nazis filmed a performance of Brundibar for their propaganda film, “The Führer Presents the Jews with a City.” Nearly all of the children who performed in the opera were eventually deported to Auschwitz and murdered in the gas chambers. Hans Krása met the same fate.

Brundibar’s history is brutal, but the opera itself is a parable of hope and justice with no
reference to the horrific time and place of its creation or the venue of its forced performances.
Based on a play by Aristophanes, it tells the tale of a poor family whose children seek money to
buy milk for their sick mother. They decide to imitate an organ-grinder, called Brundibar, and
raise the necessary funds by singing on the street corner. When they do, Brundibar and a
policeman chase them away. During the night they spend on a bench, a dog, a cat, and a sparrow, promise them
help. In the morning, neighborhood children join them in forming a chorus and singing a beautiful lullaby that is generously rewarded by donations from the passers-by. In an unguarded moment, Brundibar steals their money,
but after a brief chase he is caught and the children sing a song of victory. The opera is easily comprehensible due
to its melodic, expressive and accessible music. Comedic aspects of the action are palliative and appealing. Although there are no direct allusions to the Holocaust in the opera, the children prevail over the villain Brundibar, who has a mustache much like the Nazi leader Hitler. This story mirrors the struggle of the Jews to triumph over their oppressors.

VEDEM
Opera by: Lori Laitman
​
Commissioned by Music of Remembrance in 2010, it tells the story of the boys of Theresienstadt and their underground newspaper of poetry and essays called “Vedem,” Czech for “In the Lead.” The libretto crafts “a moving verse drama that entwine[s] six of the original Vedem poems. It allow[s] [Laitman] to musically capture not only the tragic aspects of the boys’ lives, but their humanity—their worries, their spirited response to adversity, their yearnings and their humor” (from Lori Laitman’s website). This oratorio is scored for mezzo-soprano, tenor, children’s choir, and chamber orchestra, and will serve as a beautiful companion piece for the public performances, due to its excellent artistic quality, integrated subject material and similar vocal/orchestration requirements. To further integrate these two works, we will present Vedem as a framing device by placing Brundibar in the middle of the oratorio, at the point in the oratorio text that refers to “a model ghetto” where “the happy Jews performed an opera,” and the boys exhort the visiting Red Cross dignitaries not to leave before they learn the awful truth about life in the camp.

The oratorio Vedem provides historical context for the opera Brundibar, which will help the audience to vicariously experience what the populace endured during this tumultuous time.