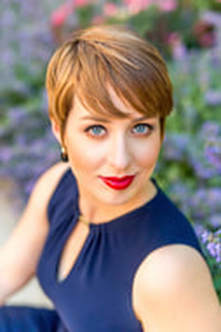 Soprano Fotina Naumenko is a versatile artist who enjoys singing a wide
variety of genres, including opera, oratorio, art song, musical theater, choral and
contemporary music, both as a soloist and chamber musician.
Favorite opera roles have included Blonde in Mozart's Abduction from the Seraglio (Delaware Valley Opera), Brigitta in Tchaikovsky's Iolanta and Amor in Gluck's Orfeo ed Euridice (Rimsky-Korsakov Conservatory Theater), Clorinda in Rossini's Cenerentola (Cincinnati College-Conservatory of Music) as well as Euridice in Monteverdi's L'Orfeo and Coridon in Handel's Acis and Galatea (Cincinnati Chamber Opera).
Recent concert performance highlights include Fotina's solo debut with the Boston Pops in the symphonic premiere of the Broadway musical revue Sondheim on Sondheim; the soprano solo in Bach's Ascension Oratorio with the Cincinnati Chamber Orchestra and the Cincinnati Vocal Arts Ensemble; a performance of David Lang's Just at the Tanglewood Festival of Contemporary Music that was hailed as "a beautiful performance" by the New York Times; Debussy's Nocturnes (III. Sirènes) with the Cincinnati Symphony Orchestra under the direction of Louis Langrée; and selections from Shostakovich's Satires at the 2017 Constella Festival as part of a program entitled From Russia with Love.
Fontina sings with several vocal ensembles including Grammy-award winning Conspirare, Cincinnati's Vocal Arts Ensemble, and Coro Volante, an ensemble dedicated to the performance and recording of music by living composers. In 2014-2015 she completed a Fulbright fellowship in St. Petersburg, Russia, where she focused on her specialization in Russian repertoire. Fotina is a graduate of the Eastman School of Music and the Cincinnati College-Conservatory of Music.
Fotina is excited to join Indianapolis Opera as a Resident Artist this spring! After completing the residency, she will be returning to the Tanglewood Music Festival as a Soprano Fellow in summer 2018. To learn more about Fotina, please visit her website at www.fotinanaumenko.com.