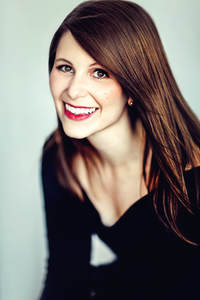 American Mezzo-soprano Gretchen Adams has been noted for her bright, flexible voice and velvety tone. During the 2016-17 season she joined Madison, Wisconsin’s Opera for the Young for a season of touring, as Dr. Dulcamara in Donizetti’s The Elixir of Love, and may be heard on the 2017 Naxos release of Ross Crean’s Great God Pan. Ms. Adams has lately enjoyed collaborating with several American composers, including performing Chicago premieres of Even for Wars by Scott Wasserman, performing with the Joffrey Ballet Chicago in an evening honoring Isadora Duncan, as well as a recent premiere of works by Teddy Niedermaier at Chicago’s Poetry Foundation.
As a young artist with Cedar Rapids Opera Theater, she performed Maria in Man of La Mancha and Ernesto in their children's production Billy Goats Gruff. Favorite opera credits include Mercédès in Carmen and Second Lady in The Magic Flute with American Chamber Opera, Barbarina in Le Nozze di Figaro with Kor Productions as well as Ilonka in The Ball at the Savoy with Chicago Folks Operetta. She is an accomplished dancer and seeks out vocally challenging repertoire to match her on-stage physicality. Miss Adams currently lives in Chicago, IL, where she studies with Sunny Joy Langton.